Keep mobile phones, tablets or laptops away from your body: Wireless devices may cause harm

Did you ever notice the heat of your mobile phone against your ear?

Did you ever feel the warmth of the laptop against your stomach and thighs?

While recording muscle tension, we sometimes observe a signal that is NOT the actual muscle contracting.  It is an electrical signal that is recorded with sensors at the location of the body but not produced by the muscles.  In some cases, this artifact is caused by the client’s mobile phone or other wireless device being activated even though the ringer function was set to off.  Below is an example of an artifact signal that can be hundreds of times larger than the biological muscle (electromyography) or brainwave (electroencephalography) signal as shown in Figure 1. 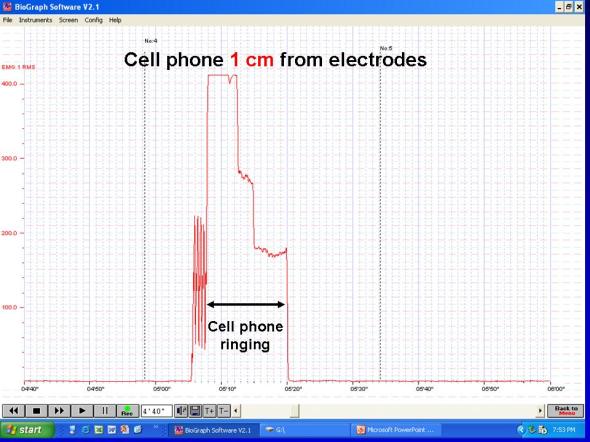 The artifact was caused by the microwaves radiating from the cell phone antenna as it communicated to the  by cell phone tower. As long as the cell phone and the wireless devices are being used for talking, texting, streaming data, or audio and visual media, they are communicating with the tower.  Most cell phones, as long as they can receive calls, also connect every 900 milliseconds to the tower to report its location. To prevent artifacts in electromyographic and electroencephalographic recording, request clients to turn off their mobile phone or switch it to airplane mode.

When we initially observed this artifact produced by the mobile phone antenna signal, we wondered if this could be a health risk.  I was further persuaded after reading epidemiologist, Devra Davis, Ph.D superb book, Disconnect- The Truth about cell phone radiation, What the industry is doing to hide it, and How to protect your family. For more information see her website Environmental Health Trust (http://ehtrust.org/).

Although being exposed by microwave radiation at 1 watt of power output while talking is not the same as being blasted for two minutes by 1000 watts necessary to bring a cup  of water to boil in a microwave, most of us experience ongoing exposure for many minutes per day.  We are now connected 24/7- anywhere we go-from coffee shop to the bedroom. We tend to keep cell phones and other wireless devices on our person. Men often stash it in their pant pockets and woman sometimes in their bra.  Yes, you can even buy a bra with a built in cell phone pocket.

We use smartphones and tablets as a communication device for texting, talking, updating our social networks, searching the web, and as an alarm clock next to our head while sleeping (we do not want to disturb our roommate or partner).  Smart phones and tablets have become omnipresent in our world. They are used in classes, while waiting for appointments (the stack of dated magazines have become irrelevant), and are the last thing we check before going to sleep. Soon these devices will be so small that they will be inserted in our ear, under our skin, or embedded in our glasses — truly connected at all times.

In our 2012 survey, university students used mobile phones and tablets/i-Pads for at least 118 minutes a day, of which 40 minutes occurred just before going to sleep. This meant that they spent 19.7 days a year texting/talking on their smartphones (Waderick et al, 2013) as shown in figure 2. 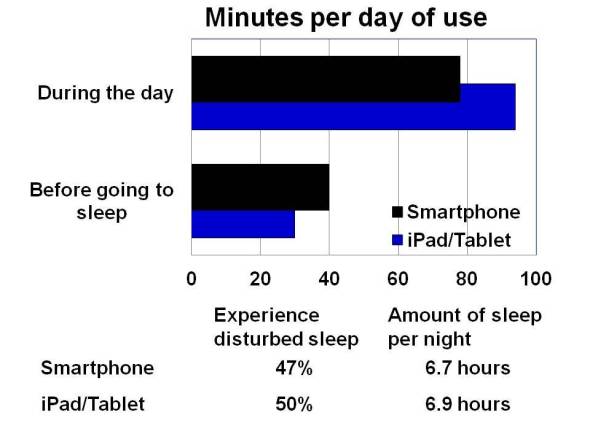 In less than 20 years, we can no longer imagine a life without these wireless devices and go into a panic when they are missing. We have accepted the new technology and assumed that it is safe.  Yet, could this be similar to the early cigarette debates in the tobacco industry?  Most of the published studies claimed that cigarettes did not harm people and had nothing to do with cancer. We now know better.  One cigarette probably does no harm; however, smoking many cigarettes over numerous years does cause harm.

When radar was initially developed in World War II, some sailors on ships in the North Atlantic Ocean warmed themselves by momentarily standing in front of the radar beam. While they did get warmer, they also became sterile for a period of time since heating the testicles with radar reduced sperm production. Could a similar effect occur by the heat and microwaves emitted from a laptop, tablet, or cell phone against the abdomen or lap?

Research findings over the last twenty years have often been ambiguous, although indicating that there is a risk (Davis, 2010). It is unlikely that the telecommunication industry will support research into possible dangers since it would put them at financial risk. Instead, the telecommunication industry lobbies to oppose laws that would require right to know labeling of cell phones with disclosure of possible risks or antenna output power.  A more neutral perspective is reported by the International Agency for Research into Cancer (IARC), which is part of the World Health Organization World Health Organization (WHO). As of 2011, the WHO has classified mobile phones (and any wireless device that uses microwaves to communicate) as a group2b risk, which means that they are “possibly carcinogenic to humans” and there is “limited evidence” that something causes cancer in people, and even the evidence from animal studies is “less than sufficient”.

Research studies report that adults who have used mobile phones intensively for at least ten years experience an increase in brain cancer (glioma and acoustic neuroma), salivary gland cancer, and even rare eye cancers on the side of the head where the cell phone was predominantly held (Davis, 2010).  Some men diagnosed with testicular cancer had the cancer occur in the testicle that was closest to the pant pocket where they stashed their cell phone (Davis, 2013).

More recently, some women who have habitually stashed their cell phone in their bra have been diagnosed with a rare breast cancer located beneath the area of the breast where they stored their cell phone.  Watch the heart breaking TV interview with Tiffany. She was 21 years old when she developed breast cancer which was located right beneath the breast were she had kept her cell phone against her bare skin for the last 6 years.

While these rare cases could have occurred by chance, they could also be an early indicator of risk. Most research studies were based upon older adults who have tended to use their mobile phone much less than most young people today. The average age a person acquires a mobile phone is ten years old. Now infants and toddlers are entertained by smartphones and tablets–the new technological babysitter.  The possible risk may be much greater for a young people since their bodies and brains are still growing rapidly.  I wonder if the antenna radiation may be one of the many initiators or promoters of later onset cancers. And, most cancer take twenty or more years to develop.

Instead of waiting for twenty or thirty years to find out definitively whether the antenna radiation is, or is not, harmful, adapt the precautionary principle and reduce your and your children’s exposure. The simplest strategy is to keep the devices away from your body.  The further it is away the device is from the body the less power of the antenna signal reaches you as shown in figure 3.

Figure 3. Decrease in amplitude of microwave emission as recorded from the skin as a function of distance (from: Lin, I.M. & Peper, E., 2009).

Why take the risk! Act now and reduce the exposure to the antenna radiation by implementing the following suggestions:

For more background, read epidemiologist Devra Davis’ book, Disconnect–The truth about cell phone radiation, What the industry is doing to hide it, and How to protect your family.

*I thank James Johnston, PhD., for his constructive feedback.

Davis, D. (2010).  Disconnect-The Truth about cell phone radiation, What the industry is doing to hide it, and how to protect your family..  New York: Plume.

Waderich, K., Peper, E., Harvey, R., & Sara Sutter. (2013). The psychophysiology of contemporary information technologies-Tablets and smart phones can be a pain in the neck. Presented at the 44st Annual Meeting of the Association for Applied Psychophysiology and Biofeedback. Portland, OR.

56 Comments on “Keep mobile phones, tablets or laptops away from your body: Wireless devices may cause harm”