Giving a voice to the agony of rape and justice system 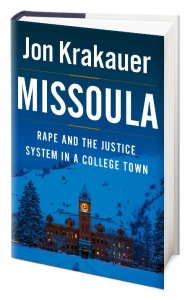 19% of women and 6.1% of men have been victims of at least one completed or attempted sexual assault since entering college (Krebs et al, 2007). These numbers are probably lower than the actual rate because many rape and other sexual assault victims do not report their attacks to law enforcement (Kruttschnitt et al, 2014). Rape or attempted rape victims sometimes blame themselves for the assault especially when they “did not resist/fight the aggressor”. The rape experience can even be more devastating when it is done by an acquaintance rape and 84% of the victims knew their attacker beforehand (Kuersten, 2003)–it is an experience of total betrayal. The horrifying experience and the challenges to achieve justice is sensitively described in the superb book by Jon Krakauer, Missoula Rape and the justice system in a college town.

It is a MUST book to read for every therapist, educator or anyone interested in understanding the human suffering of rape. The book describes the intimate and long lasting emotional impacts of rape with the challenges of achieving justice. It complements my previous post, Porges and Peper Propose Physiological Basis for Paralysis as Reaction to Date Rape, which explains that paralysis and not fighting the aggressor is not the result of agreeing to further sexual activity but  the activation of the reptilian stress response of death fainting and withdrawal. A survival response by which the person cannot respond (Porges & Peper, 2015)..