Evoking your healing potential: You are your placebo

Be careful what you think. You may get what you wish.

The power of the placebo and nocebo are remarkable and often overlooked in medicine. With a placebo, severe chest pain disappears with mock surgery, Parkinson’s tremors stop, knee pain is eliminated following mock arthroscopic knee surgery and even  of lymphosarcoma can be affected (Beecher, 1961; Benedeteti, 2007; Moseley et al, 2002; Kirkley et al., 2008; Klopfer, 1957; Moerman & Jonas, 2002). On the other hand, nocebo can increase pain, accelerate cancer growth, and cause death (Cannon, 1942; Klopfer, 1957; Benedeteti, 2007). These are demonstrations of the self-healing and non-healing potential intrinsic within each of us.

The placebo response (from Latin, “I shall please”) is the beneficial physiological or psychological effect that results from the administration of an otherwise ineffective or inert substance, procedure, instruction. and/or environment.  An example of placebo on neuron activity is demonstrated with  a patient who has Parkinson’s disease (see figure 1).

Figure 1. Recording the activity of single neurons from the brain of an awake patient suffering from Parkinson’s disease. Both the recording apparatus (a) and the electrode track (b) can be seen. In (c), the activity of a single neuron in the subthalamic nucleus can be seen before and after placebo administration (reproduced from: Benedeteti, F.(2007). The Placebo and Nocebo Effect: How the Therapist’s Words Act on the Patient’s Brain. Karger Gazette, 69).

The placebo/nocebo response is modulated by our covert cultural, familial and personal beliefs, limitations and expectations. The placebo/nocebo effects are the actual demonstrations that the limits of our beliefs are the limits of our possibilities. This process is well described  in the recent published book, You are the Placebo: Making Your Mind Matter, by Chiropractor Joe Dispenza.

Dr. Dispenza describes the classic studies of placebo, mental processes and possible mechanisms by which placebo effects occur and disappears and how our thoughts and expectancies create our reality.  The placebo transforms the inner beliefs and give the person the experience of improved health which transforms beliefs. In many cases we can experience improvement but are pulled back into our previous beliefs and self-images of illness by inner and outer cues which are associated with disease process.

The book describes of the covert conditioning process by which we return to our old self and may maintain illness. It is challenging to maintain new beliefs and act/think in new patterns. The internal mental chatter and doubts flood our awareness. Even the question, “How long will the improvement last?” re-evokes the associative mental conditioned disease patterns. If it is possible to interrupt and transform our thoughts moment by moment, minute by minute, hour by hour, day by day and not just for 15 minutes of practice, remarkable changes are sometimes possible. Every thought that triggers an association of the illness state needs to be interrupted and redirected. When patients somehow transform their thoughts, it may result in reversing and eliminating illnesses such as polyostotic fibrous dysphasia, Hashimot’sthyroiditis or chronic lympocytic thyroiditis, and secondary progressive multiple sclerosis.

I highly recommend this book for its outstanding description of placebo/nocebo and cognitive a model of the conditioning processes that underlie it. The book offers hope and inspiration for many patients who  accept “what is/was” and  are open to the present and future possibilities without judgement.

The book’s cases  show that it is possible to reverse chronic “incurable illnesses.” Patients and health care providers should read the book–it provides hope, empowerment, and possibility. It is an antidote to the feeling that there is nothing one can do except to live with the illness. Medicine needs to explore and study the unusual patient who has reversed the disease process and ask, “How can we understand this process and teach it to other patients.”

The major limitation of the book is the absence of data; namely, what percentage of the patients/participants who have practiced Dispenza’s techniques have actually benefited and transformed their illness? The book would be more useful if it included both successful and the many unsuccessful cases. This would help patients who do the practices and do not improve. These patients sometimes  blame themselves and failed at their self-healing—a process that increases depression and hopelessness. We need to realize that many factors affecting our health and illness are beyond our control.

Although I agree with Dr. Dspenza’s basic premise that our beliefs, acceptance of what is and being open to the present and future supports healing. This perspective is only part of the whole picture. Health and illness are multi-factorial and many factors are not within our control.

Read the book and skip chapter 8, The Quantum Mind.  This chapter attempts to describe the physics of the healing process using quantum physics.  As I did not understand quantum physics and quantum mind, I asked my colleague, James Johnston, PhD, who is an expert in quantum physics, to read it for accuracy. He confirmed my gut reaction when he said, “the quantum physics description of how energy changes is pseudo science, involving an incomplete understanding of quantum theory.”

Benedeteti, F. (2007). The Placebo and Nocebo Effect: How the Therapist’s Words Act on the Patient’s Brain. Karger Gazette, 69.

“I felt more motivated to get things done.”
“After practicing this exercise for a week, my productivity significantly increased.”
“I felt more in control of my life in a fun way that made me feel successful.”
“Every time it increased my mood, confidence and energy levels.”
— Reports by participants  after practicing “transforming failure into success”

Putting off something we set out to do can leave us feeling unproductive, drained of energy, and guilty. Procrastination can also contribute to dysphoria, depression, and self-recrimination.   When people reflect on their own activity, they often using blaming language such as “I should not have done that,” “That was stupid,” or “What was I thinking.”  The challenge is how to change this blaming language — through which the person continues to rehearse how they have failed — to positive and empowering language and images.

For many years, we have taught students a useful daily practice,Transforming Failure into Success, to transform the self-blame into optimizing performance. When the students as well as athletes practices this for a week, they report significant improvement in study habits, dealing with anger, and even sports performance.  This year we systematically measured the effect of this practice and compared it to a control group.  The students, just as previous athletes and clients, reported a significant decrease in procrastination and increase in productivity and energy as compared to the control group  as shown in figure 1. 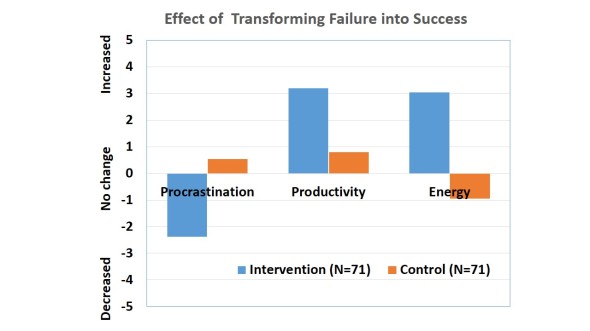 When we procrastinate or blame ourselves, we increase our chances of repeating that same behavior. We often forget that our ongoing thoughts and framing of past experiences become the template for our future behavior. It is easy to look back and  criticize yourself for not having done something you feel you should have done, or having done something you later regretted doing.  Unfortunately, this strategy only strengthens the memory of the mistake. The more you mentally rehearse/imagine yourself performing the desired (or undesired!) behavior, the more likely you will actually perform that behavior.

Thus the first step is  to accept that what we actually did was the only thing we could have done given our history, training, maturity, and circumstances. The key is to rehearse what you would like to do or achieve. This practice is illustrated by a golfer who hits a ball into the pond.  Instead of cursing himself and constantly repeating, “I should not have hit the ball into the pond,” the golfer acknowledges the problem and then asks , “What was the problem?” He then considers that he might not have hit the ball hard enough or that he might not have accounted for the cross winds. Or, he did not know the cause of the problem and needed to ask a consultant for suggestions. He decides that he did not account for the cross winds and then asks, “How could I have done it differently to get the outcome I wanted?” He then imagines exactly how hard and in what direction to hit the ball. He mentally rehearses the appropriate swing a number of times, each time seeing the ball landing on the green just a short putt away from the fifth hole. As he images this perfect swing, he feels it in his body. Later that day when his golfing partner asks him what happened when his ball went into the pond, he answers, “It went into the pond, and let me now tell you how I would hit it now.” Thus, the past error becomes the cue to rehearse the desired behavior.

Instructions for transforming failure into success

Each time when you observe yourself thinking, “I wish I’d done that differently,” Stop! Give yourself credit that you did the only thing you could have done and that you could NOT have done it any differently given your history, skills, and environmental factors at that moment. Accept what happened and recognize that you are now ready to explore new options. Next, breathe and relax, then ask yourself, “If I could do this over, how would I do it now given the new wisdom I have gained?” Then imagine yourself doing it in the new way.

Each time you observe an action which upon hindsight could have been improved, mentally rewrite how you would like to have behaved. Use the following five-step process:

The more senses you invoke in your imagination and visualization, the more real the experience will feel and the more it will be become the new pattern. Imagine every small step, sensation, and thought—everything that would occur when you actually do the task. How you image the task is not important. Some people see it in living color while others only have a sense of it. Just take yourself through the new activity. Rewriting the past takes practice. During the mental rehearsal the old pattern often reasserts itself. Just let it go and practice again. If it continues to recur, ask yourself, “What do I need to learn from this; what is my lesson?”

This practice only applies to one’s own behavior–you can only change yourself. Remember that others have the freedom and the right to react in their own way. In your imagery, see yourself changing. Others may also change in their response to your change; however, they have the right NOT to change.

Finally, there are many settings in which we had no control and, regardless of our behaviors, nothing would be different (e.g., being abused as a young child). In such cases, the adaptive response is to acknowledge what happened, reaffirm that you are no longer the same person as when the experience occurred. Then take a deep breath and relax, and let go while knowing that this personal experience has taught you a set of coping skills that have nurtured your own growth and development.

This blog is adapted from our recent published article, Increase productivity, decrease procrastination and increase energy, which describes the background, methodology and research findings.