How effective is treatment? The importance of active placebos

How come some drugs or medical procedures are initially acclaimed to be beneficial and later ineffective or harmful and withdrawn from the market?

How come some patients with a cancer diagnosis experience symptom remission after receiving a placebo medication?  Take the case of Mr. Wright. Several decades ago Dr. Klopher (1957) described Mr. Wright as a patient who had a generalized and far advanced malignancy in the form of a lymphosarcoma with an estimated life expectancy of less than two weeks. Following the diagnosis Mr. Wright read a newspaper article about a promising experimental cancer medication called Krebiozen and requested that he receive the latest treatment.  Soon after receiving the drug, Mr. Wright had a complete remission of cancer symptoms with no signs of the deadly tumor. For over two months after receiving the new promising drug, Krebiozen, Mr. Wright engaged in a normal life and was even able to fly his own plane at 12,000 feet.  After a promising introduction to the medication, Mr. Wright subsequently read another newspaper article which proved the new medication to be a useless, inert preparation.  Confused and demoralized, the results of the wonder drug did not last and his symptoms returned. When the final AMA announcement was published “Nationwide tests show Krebiozen to be a worthless drug in treatment of cancer,” his symptoms became acute and he died within two days (Klopher, 1957).

The term placebo loosely translates as ‘I shall please you’ can be contrasted with the term nocebo which loosely translates as ‘I shall harm you’ when referring to exposure to a sham medication, treatment or procedure that results a positive outcome (placebo response), or a negative outcome (nocebo response), respectively.  The responses a person has reflect a complex interaction between many processes.  For example, when studying a placebo or nocebo response we measure internal psychological processes, measured in terms of a person’s self-reported attitudes, beliefs, cognitions and emotions; behavioral processes, measured overtly by observations of a person’s actions; and, physiological processes, measured more or less directly with instruments such as heart rate monitors, or biochemical analyses.  Most relevant is that a person’s beliefs about the placebo (or nocebo) medication, treatment or procedure leads to predictable positive (or negative) behaviors and physiological benefits or harms.

The case of Mr. Wright illustrates that we may underestimate the positive power of the placebo or, the negative power of the nocebo, where Mr. Wright’s belief about the medication’s benefits first interacted in a positive way (placebo) with his behaviors (e.g. engaging in daily activities including flying an airplane) as well as his physiology (e.g. cancer remission) and unfortunately later, in a negative way (nocebo) interacting with his physiology (e.g. cancer return) contributing to his death.

Placebo and nocebo effects are found in all therapeutic transactions when the communications between therapist and patient reflect embedded beliefs about the treatment.  For example, patients have faith in clinician’s knowledge and belief that a prescribed medication is going to be effective at treating their symptoms, which then reinforces the patient’s belief in the medication, increasing indirect, embedded placebo effects, above and beyond any direct effects from the medication. The indirect effects of placebo responses have been most studied with medications; however, placebo effects are also studied in non-drug therapies. The research on placebo effects has demonstrated time and time again that when patients expect that the drug, surgery, or other therapeutic technique to be beneficial, then the patients tend to benefit more from the treatment.

The expectancy that the treatment will be effective at reducing symptoms is overtly, and covertly communicated by the health care professional during patient interactions, as well as by drug companies through direct to consumer advertising, and social media.  The implied message is that the drug or procedure will improve symptoms, recovery or improve quality of life. On the other hand, if you do not do take the drug or do the procedure, your health will be compromised. For example, if you have high cholesterol, then take a statin drug to prevent the consequences of high cholesterol such as a heart attack or stroke.  The implied message is that if you do not take it, you will die significantly sooner.  Statins lower the risk for heart attacks; however, the benefits may be over stated. For people without prior heart disease, 60 people will have to take statins for 5 years to prevent 1 heart attack and 268 people to prevent 1 stroke. During the same time period 1 in 10 will experience muscle damage and 1 in 50 develop diabetes (theNNT, 2017 November).

If placebo and nocebo can have  significant effects on medical outcome, how do you know if the treatment benefits are due to the direct effects of a drug or procedure or due to any indirect placebo effects or a combination of both?

The randomized controlled trial (RCT) is considered the gold standard method to determine the effectiveness of a drug or procedure. The ideal study would be a double blind, randomized, placebo controlled clinical trial in which neither the practitioner nor the patient would know who is getting what condition.  For example, blinding implies the placebo group would receive a pill that appears identical to a ‘real’ pill, except the placebo has pharmacological ingredients.  Similarly, a patient may receive an ‘exploratory’ surgery in which anesthesia is given and the skin is cut however the no further actual internal surgery occurs because the surgeon determined further internal surgery was unnecessary. Although, it is not possible to perform a double blind surgery study, the patient may be totally unaware whether an internal surgery had occurred.

Peper and Harvey (2017) point out that the positive findings of an ‘effective’ treatment are not always the results of the direct effects of medications and may be more attributable to indirect placebo responses.  For example, patients may attribute the ‘effectiveness’ of the treatment to their experience of ‘non-directed’ treatment side effects that include: the post-surgical discomfort which signals to the patient that the procedure was successful, or a dry mouth and constipation that were caused by the antidepressant medication, which signals to the person that the trial medication or procedure-related medication is working (Bell, Rear, Cunningham, Dawnay, & Yellon, 2014; Stewart-Williams & Podd, 2004).

Just imagine the how pain can evoke totally different reactions.  If you recently had a heart attack and then later experienced pain and cramping in the chest, you automatically may feel terrified as you could interpret the pain as another heart attack. The fear response to the pain may increase pathology and inhibit healing (a nocebo response).  On the other hand, after bypass surgery, you may also experience severe pain when you move your chest. In this case, you interpret the pain as a sign that the bypass surgery was successful, which then reduces fear and reinforces the belief that you have survived a life threatening situation and will continue healing (placebo response).

Many research studies employ a placebo control, however what is less typical is a double-blind study using an ‘active’ placebo (Enck, Bingel, Schedlowski, & Rief, 2013). Less than 0.5% of all placebo studies include an active placebo group. (Shader, 2017; Jensen et al, 2017).

Unfortunately, a typical ‘placebo controlled’ study design is problematic for distinguishing the direct from any indirect (covert) placebo effects that occur within the study as shown in Figure 1.

Figure 1. Normal (passive) placebo control group controls and experimental group.  What is not assessed are placebo benefits induced by the medication/treatment induced side effects.

An active placebo builds on a patient’s attributions about a medication or medical procedure.  For example, a patient may be told by a clinician that feeling any side effects such as insomnia, a racing heart or, experiencing a warm flushing feeling will let them know the medication is working, so the patient becomes conditioned to expect the medication is working when they feel or experience side effects.  Whereas a passive (inert) placebo such as a sugar pill will have effects that are extremely subtly felt or experienced, an active placebo will have effects that are more overtly felt or experienced.   Examples of active placebos include administering low doses of caffeine or niacin that have effects which may be felt internally however which do not have the same effects as the medication.  When a patient is told they may have side effects from the medication that include felt changes in heart rate or a flushing feeling, the patient attributes the changes they feel to a medication they believe will bring about benefits, even though the changes are rightfully attributed to the caffeine or niacin in the active placebo.

An active placebo triggers observed and felt body changes which do not affect the actual illness. For surgical procedures, an ‘active’ placebo control would be a sham/mock surgery in which the patient would undergo the same medical procedure (e.g. external surgery incision) without continuing some internal surgical procedure (Jonas et al, 2015).  In numerous cases of accepted surgery, such as the Vineberg procedure (Vineburg & Miller, 1951) for angina, or arthroscopic knee surgery for treating osteoarthritis, the clinical benefits of a sham/mock surgery were just as successful as the actual surgery. Similar studies suggest the clinical benefits were solely (or primarily) due directly to the placebo response (Beecher, 1961; Cobb et al, 1959; Moseley et al, 2002).

To persuasively demonstrate that a treatment or therapeutic procedure is effective it should incorporate a study design using an active placebo arm as shown in Figure 2. 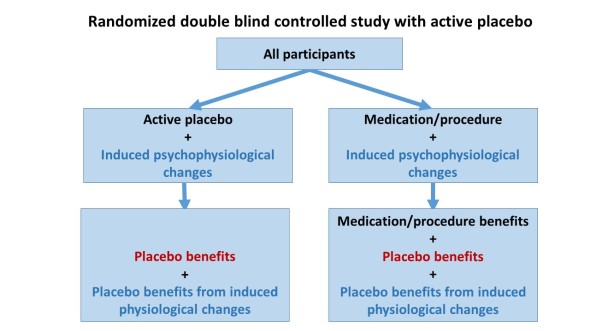 Some treatments may be less effective then claimed because they were not compared to an active placebo, which could be one of the reasons why so many medical and psychological studies cannot be replicated.  The absence of ‘active’ placebo controls may also be a factor explaining why some respected authorities have expressed some doubt about published scientific medical research results.  Following are two quotes that illustrate such skepticism.

“Much of the scientific literature, perhaps half, may simply be untrue.”  —Richard Horton, editor-in-chief of the Lancet (Horton, 2015).

“It is simply no longer possible to believe much of the clinical research that is published, or to rely on the judgment of trusted physicians or authoritative medical guidelines. I take no pleasure in this conclusion, which I reached slowly and reluctantly over my two decades as an editor of the New England Journal of Medicine”  —Dr. Marcia Angell, longtime Editor in Chief of the New England Medical Journal (Angell, 2009).

A quick way to ask whether a medication or medical treatment effectiveness is the result of placebo components is to ask the following questions:

Unfortunately, most clinical studies that includes pharmaceuticals and/or surgery do not test their medication, surgery against an ‘active’ placebo.  Whenever possible, enquire whether an active placebo was used to determine the degree of effectiveness of the proposed treatment or procedure.  Fortunately, the design of ‘active’ placebo-controlled studies is very possible for anyone interested in comparing the effectiveness of medications, treatments and procedures in various settings, from hospitals and clinics to university classrooms and individual homes.

In summary, the benefits of the treatment must significantly outweigh any risks of negative treatment side effects.  Short-term treatment benefits need to be balanced by any long-term benefits.  Unfortunately, short-term benefits may lead to significant, long-term harm such as in the use of some medications (e.g. sleep medications, opioid pain killers) that result in chronic dependency and which lead to a significant increase in morbidity and mortality of many kinds. We suggest that more medications and other procedures are tested against an active placebo to investigate whether the medication or procedure is actually effective.