Be careful what you think*

Thoughts/emotions affect body and body affects thoughts and emotions is the basis of the psychophysiological principle formulated by the biofeedback pioneers Elmer and Alice Green. The language we use, the thoughts we contemplate, the worries and ruminations that preoccupy us may impact our health.

Changing thoughts is the basis of cognitive behavior therapy and practitioners often teach clients to become aware of their negative thoughts and transform the internal language from hopeless, helpless, or powerless to empowered and positive. Think and visualize what you want and not what you do not want. For example, state, “I have studied and I will perform as best as I can” or  “I choose to be a non-smoker instead of stating, “I hope I do not fail the exam” or “I want to stop smoking.” The more you imagine what you what in graphic detail, the more likely will it occur.

Most people rationally accept that thoughts may affect their body; however, it is abstract and not a felt experience.  Also, some people have less awareness of the mind-body connection unless it causes discomfort.  Our attention tends to be captured by visual and auditory stimuli that constantly bombard us so that we are d less aware of the subtle somatic changes.

This guided practice explores what happens when you recall helpless, hopeless, powerless or defeated memories as compared to recalling empowering positive memories. It allows a person to experience–instead of believing—how thoughts impact the body. 98% of participants felt significantly weaker after recalling the helpless, hopeless, powerless or defeated memories. Once the participants have experienced the effect, they realize how thoughts effect their body.

The loss of strength is metaphor of what may happen to our immune system and health.  Do you want to be stronger or weaker? The challenge in transforming thoughts is that they occur automatically and we often doubt that we can change them. The key is to become aware of the onset of the thought and transform the thought.  Thoughts are habit patterns and the more you practice a habit, the more it becomes automatic.  Enjoy the experiential exercise, Mind-body/Bodymind-connection: Muscle testing.

*I thank Paul Godina, Jung Lee and Lena Stampfli for participating in the videos.

Have you experienced that your attentions is more focused in the morning than late afternoon?

Have you wondered what is the best time in the day to have a job interview?

Is it better to have an operation in the morning or in the afternoon?

These and many other questions are explored in the superb book by Daniel Pink, When-The scientific secrets of perfect timing. This book reviews the literature of chronobiology, psychology, and behavior economics and describes the effect of time of day on human behavior. For example, students do significantly better if they take math tests in the morning than late afternoon or parolees have a much higher chance of being paroled early morning or right after the judge has taken a break than before lunch or late afternoon.    Read Pink’s book or watch his JCCSF presentation and use the information to change your own timing patterns to optimize your health and performance. 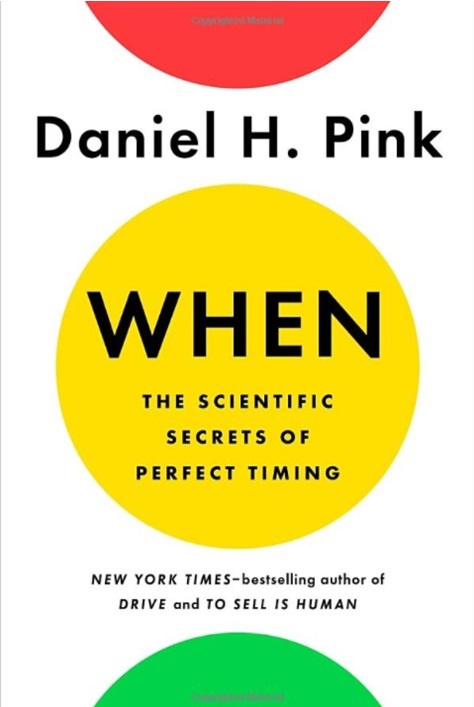 Do you blank out on exams? Improve school performance with breathing* **

“I opened the exam booklet and I went blank.”

“When I got anxious, I took a slow breath, reminded myself that I would remember the material. I successfully passed the exam.”

Blanking out the memorized information that you have studied on an exam is a common experiences of students even if they worked hard (Arnsten, Mazure, & Sinha, 2012).    Fear and poor study habits often contribute to forgetting the material (Fitkov-Norris, & Yeghiazarian, 2013). Most students study while listening to music, responding to text message, or monitoring social network sites such as, Facebook, twitter, Instagram, or Pinterest (David et al., 2015).. Other students study the material for one class then immediately shift and study material from another class. While at home they study while sitting or lying on their bed. Numerous students have internalized the cultural or familial beliefs that math is difficult and you do not have the aptitude for the material—your mother and father were also poor in math (Cherif, Movahedzadeh, Adams, & Dunning, 2013). These beliefs and dysfunctional study habits limit learning (Neal, Wood, & Drolet, 2013).

Blanking out on an exam or class presentation is usually caused by fear or performance anxiety which triggers a stress response (Hodges, 2015; Spielberger, Anton, & Bedell, 2015). At that moment, the brain is flooded with thoughts such as, I can’t do it,”  “I will fail,” “I used to know this, but…”, or “What will people think?” The body responds with a defense reaction as if you are being threatened and your survival is at stake.  The emotional reactivity and anxiety overwhelms cognition, resulting in an automatic ‘freeze’ response of breath holding or very shallow breathing. At that moment, you blank out (Hagenaars, Oitzl, & Roelofs, 2014; Sink et al., 2013; Von Der Embse, Barterian, & Segool, 2013).

Experience how your thinking is affected by your breathing pattern.  Do the following practice with another person.

Have the person ask you a question and the moment you hear the beginning of the question, gasp as if you are shocked or surprised.  React just as quickly and automatically as you would if you see a car speeding towards you.  At that moment of shock or surprise, you do not think, you don’t spend time identifying the car or look at who is driving. You reflexively and automatically jump out of the way. Similarly in this exercise, when you are asked to answer a question, act as if you are as shocked or surprised to see a car racing towards you.

Practice gasping at the onset of hearing the beginning of a question such as,  “What day was it yesterday?” At the onset of the sound, gasp as if startled or afraid. During the first few practices, many people wait until they have heard the whole phrase before gasping.  This would be similar to seeing a car racing towards you and first thinking about the car, at that point you would be hit. Repeat this a few times till it is automatic.

Now change the breathing pattern from gasping to slow breathing and practice this for a few times.

Now repeat the two breathing patterns (gasping and slow breathing) while the person asks you a subtraction or math questions such as, “Subtract 7 from 93.”

In research with more than 100 college students, we found that students had significantly more self-reported anxiety and difficulty in solving math problems when gasping as compared to slow breathing as shown Figure 1 (Lee et al, 2016; Peper, Lee, Harvey & Lin, 2016).

As one 20 year old college student said, “When I gasped, my mind went blank and I could not do the subtraction. When I breathed slowly, I had no problem doing the subtractions. I never realized that breathing had such a big effect upon my performance.”

When you are stressed and blank out, take a slow diaphragmatic breath to improve performance; however, it is only effective if you have previously studied the materials effectively. To improve effective learning incorporate the following concepts when studying.

When you take charge of your study habits and practice slower breathing during studying and test taking, you may experience a significant improvement in learning, remembering, accessing, and processing information.

Swingle, M. (2016). i-Minds: How cell phones, computers, gaming and social media are changing our brains, our behavior, and the evolution of our species. Gabriola Island, BC, Canada: New Society Publishers.

*I thank Richard Harvey, PhD. for his constructive feedback and comments and Shannon Lee for her superb research.

“I feel much more relaxed and realize now how unaware I was of the unnecessary tension I’ve been holding”  is a common response after muscle biofeedback training. Many people experience  exhaustion, stiffness, tightness, neck, shoulder and back pain while working long hours at the computer or while exercising.  As we get older, we assume that discomforts are the result of aging. You just have to accept it and live with it–grin and bear it–or you need to be more careful while doing your job or performing your hobby.  The discomfort in many cases is the result of misuse of your body.  Observes what happens when you perform the following experiential practice Threading the needle.

Perform this task so that an observer would think it was real and would not know that you are only simulating threading a needle.

Imagine that you are threading a needle — really imagine it by picturing it in your mind and acting it out. Hold the needle between your left thumb and index finger. Hold the thread between the thumb and index finger of your right hand. Bring the tip of the thread to your mouth and put it between your lips to moisten it and make it into a sharp point. Then attempt to thread the needle, which has a very small eye. The thread is almost as thick as the eye of the needle.

As you are concentrating on threading this imaginary needle, observed what happened? While acting out the imagery, did you raise or tighten your shoulders, stiffen your trunk, clench your teeth, hold your breath or stare at the thread and needle without blinking?

Most people are surprised that they have tightened their shoulders and braced their trunk while threading the needle.  Awareness only occurred after their attention was directed to the covert muscle bracing patterns.

In many cases muscles are tense even though the person senses and feels that they are relaxed.  This lack of awareness can be resolved with muscle biofeedback–it makes invisible visible.  Muscle biofeedback (electromyographic feedback) is used to monitor the muscle activity, teach the person awareness of the previously unperceived muscle tension and  learn relax and control it. For more information of the use of muscle biofeedback to   improve health and performance at work or in the gym, see the published chapter, I thought I was relaxed: The use of SEMG biofeedback for training awareness and control, by Richard Harvey and Erik Peper. It was published in W. A. Edmonds, & G. Tenenbaum (Eds.). (2012), Case studies in applied psychophysiology: Neurofeedback and biofeedback treatments for advances in human performance. West Sussex, UK: Wiley-Blackwell, 144-159.

0.000000 0.000000
Hi, I'm Erik Peper, Professor of Holistic Health of San Francisco State University, President of the Biofeedback Federation of Europe, and I also maintain a private practice (www.biofeedbackhealth.org) I love exploring new ways of empowering people to optimize health and wellness. I am inspired by seeing people heal and a good cappuccino.